The classical method is fundamental to Mother of Divine Grace School. It permeates every aspect of our program from the selection and application of texts to our interactions with parents and students through our consultations and teacher programs. The following is a general explanation by Laura Berquist of the methodology behind our program.

The end of education is wisdom. Man desires by nature to know, and that means we want to have not only the facts, but the reasons for the facts. We want to think about the highest things, the most noble, the most interesting in themselves.

There are steps in such an education. One can't begin by studying the very highest things. One doesn't take out the Summa Theologica of St. Thomas and begin a study of the nature of God with one's second grader. Why not? Because the student won't be able to understand what he reads. He needs to do some preliminary work. But that preliminary work is ordered to eventually understanding the very highest truths. 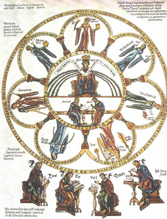 Liberal education, which we also call classical education, is such an education. It begins in wonder and aims at wisdom. It involves the seven liberal arts: grammar, logic, rhetoric, arithmetic, geometry, music, and astronomy. It also includes the study of nature, the soul, ethics and politics, the highest created objects, and finally that to which all the others are ordered - theology, an understanding of the divine. Liberal education in its perfection is Catholic education, for it has the same end, identically, as the Catholic faith: the highest, best, and most perfect object, God.

The education we give our children is intended to give them the beginning of the education every educated person in Western Civilization once received, a classical or liberal arts education. In such an education the idea is to educate the man as man, whatever vocation he may pursue. All of his faculties are used. He develops all the powers of his soul. His mind is formed, strengthened, and developed.

Though all men think, thinking can be done well or badly, and one can be taught to do it well. In large measure, the role of the teacher of grade and high school children is this: teaching children to think well.

To do that, however, one must be familiar with how thinking takes place in the human person. The exposition I am about to give as to how one thinks comes from the De Anima of Aristotle, and it comes from a remarkably complex series of considerations. I am summarizing the conclusions of that involved argument, and therefore, necessarily, won't do justice to the whole. Nonetheless, as I think every teacher should have at least a general understanding of this process, I am going to give the summary, defective as it may be. 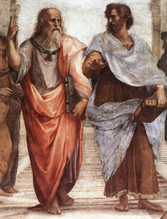 First, one receives the form of external objects by means of his five senses. He sees, hears, smells, tastes or touches the objects around him. That information is received by one or more of the five proper senses and passed on to what Aristotle calls the common sense. He reasons to the existence of this faculty because he sees that though the eyes can tell, for example, that the object on the table is white, and the tongue can tell that it is sweet, the eyes can't tell that it is sweet, and the tongue can't tell that it is white. Yet the person knows that it is the same object that is both white and sweet. Therefore, there must be some place in one where this information is integrated, and Aristotle calls that place the common sense.

Then, this integrated object is passed on (via nerves, I suppose) to what Aristotle calls the 'vis cogitativa', or 'thinking power'. The function of this power is to sort the objects into like kinds. It doesn't require universal knowledge, but only deals with the particulars in front of it, simply sorting them. An analogy that occurs to me is the way the baby uses that sorting toy that has holes on the top in the shape of a triangle, a rectangle, and a circle. He picks up the block in the shape of a triangle and sees that it fits with the triangle-shaped hole, so he puts the block in there. Similarly, he sees that the circle-shaped cylinder fits in the circle-shaped hole, and puts it in. He doesn't need to make some general consideration of 'triangularity' or 'circleness' to do that, he just sees a likeness in two particular things.

is currently attending the University of Michigan pursuing a Bachelors of Science in Nursing. Julie received scholarships to the university, received University Honors, was placed on the Dean’s List, was awarded the William J. Branstrom Freshman Prize, and named the James B. Angell Scholar. She hopes to work as a nure in the cardiovascular unit or ICU.

The 'vis cogitativa' works something like that. (By the way, I was once on a plane and in the flight magazine there was a fascinating article about how the electrical impulses originating in the proper senses moved along to the brain and were sorted in that process so that when the impulses actually went to the brain they didn't all go to the same place. Some went to the front right lobe of the brain, some to the left, and so on. That physical description of what happens seems to fit very well with Aristotle's philosophic judgment regarding the vis cogitativa.)

Now, there is more to the process of thinking. These images, retained in the imagination, and sorted into like kinds, are used by what Aristotle calls "the agent intellect", the active power of the mind, which, so to speak, shines a light on the images in the imagination. In virtue of this light, the universal form of the object is received into "the possible intellect". In that reception, understanding takes place. Given this process, clearly, the condition of the image is of great importance in the effectiveness of the understanding. Even concepts concerning immaterial objects like truth and beauty require an image. (De Anima, Bk III, Ch 7, 15). When you consider the highest objects, which are immaterial, you use a sense image.

So, as educators we must be concerned about perfecting whatever we can of every part of the process of thinking. There is not much one can do about the way the common sense works, or how the form is initially received, (though it is those things that the special education teacher largely concerns himself with), but the formation of the imagination is something that one can and should address.

The training of the imagination, then, is one aspect of learning that our curriculum must take into account. Another consideration is that the student should do what is appropriate and natural to him at each period of learning. (Notice that these stages involve the imagination in different ways.) He should memorize, observe and sequence at the grammatical stage. This strengthens and makes docile his imagination, so that in the next stage of learning, the analytical (sometimes called the logical or dialectical), he will have the help of a trained imagination in summarizing, analyzing, recognizing an argument, learning how to order material in an order of importance, and in constructing arguments. It is essential to this education that when the student is capable of grasping and marshaling arguments, he should practice doing so (I have found that the 7th through 9th grader's desire for argument is often noticeable!). If he does, then the last stage, the rhetorical, can be given to articulating those arguments elegantly, in the service of the truly noble. At this stage he will work on presentation of a position, polishing arguments, and putting together coherent thoughts on a subject quickly and accurately. The student should, at these various stages, have the opportunity to consider much of the same material in a different light, based on his ability, interest, and level of formation.

The preceding explanation of our curriculum is a general one. There is another level of consideration, where this general understanding of the right kind of education is expressed in specific formation goals, and then a further level where particular texts are chosen, and used in such a way as to accomplish those formation goals.